Worms Frozen for 42,000 Years in Siberian Permafrost Wriggle to Life!!! 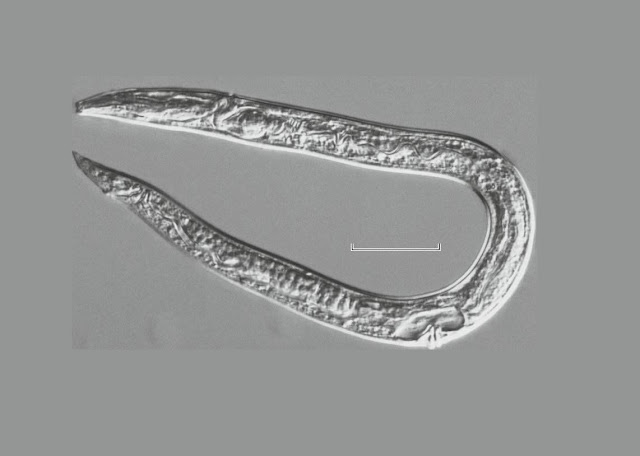 A sample of microscopic worms that were suspended in a deep freeze in Siberia for 42,000 years have come back to life after being defrosted, reported Princeton scientists.

A study, published in the journal Doklady Biological Sciences entitled with Viable Nematodes from Late Pleistocene Permafrost of the Kolyma River Lowland found that in Siberia's permafrost showed the signs of life after scientists found microscopic worms or nematodes, trapped and frozen in ice since the late Pleistocene epoch, which lasted from about 2,588,000 to 11,700-years-ago.

The scientists stated that the despite being frozen for several decades, two species of these worms were successfully revived. The researchers said that this is the first evidence of multicellular organisms that returned to life after a long nap in Arctic permafrost.

Almost one millimetre long, these tiny creatures are known for some impressive abilities. Scientists have found some of the nematodes living 1.3 km below the earth's surface. Experts mentioned that these worms are also capable of developing one of five different mouths, depending on what kind of food supplement is available around them.

Another recent study, researchers analysed almost 300 samples of Arctic permafrost and successfully found well-preserved nematodes. While one sample was obtained from a fossil squirrel burrow near the Alazeya River in the northeastern part of Yakutia in Russia and scientists believe that it is about 32,000-years-old, the other permafrost sample was collected from the Kolyma River in northeastern Siberia that is almost 42,000-years-old.

When researchers isolated female worms from the permafrost samples, they came to know that these nematodes represent two known species, Panagrolaimus detritophagus and Plectus parvus. But, surprisingly when scientists defrost these worms, they saw that these ancient species, who were in a deep sleep for decades started to move normally and eating food in such a way that nothing happened to them. Scientists mentioned this unbelievable incident as the first evidence of "natural cryopreservation" of multicellular animals.

A further study on these worms will provide assistance to the scientists to understand how these ancient nematodes acted normally after surviving such lengthy freezing. The researchers said in the study, "It is obvious that this ability suggests that the Pleistocene nematodes have some adaptive mechanisms that may be of scientific and practical importance for the related fields of science, such as cryomedicine, cryobiology, and astrobiology."

It is important to know that this is not the first case when an organism woke up from millennia in icy suspension. Earlier a group of researchers had identified a mysterious and large germ-virus  had been resurrected that was buried for 30,000 years in Siberian permafrost.
Click https://www.geologyin.com/2019/04/worms-frozen-for-42000-years-in.html?fbclid=IwAR3RaW_nx1XhOfJNYSRqcjpFPjNHrMtuh5bcAGt0TCXf9kLDhCe0WwHSLlA link to open resource.
◄ The Flames of Eternity
A Beautiful Film ►
Follow @rosemysteries

NOTES, RESEARCH, INTERACTION
ALL IN ONE PLACE!

Tweets by The Rose Mysteries

Skip Who Is Online?